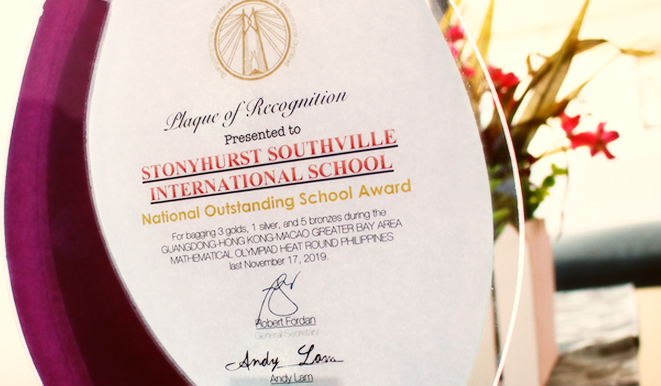 Stonyhurst Southville International School – Malarayat / Lipa Campus is one of the six schools among 146 schools in the country to receive the NATIONAL OUTSTANDING SCHOOL AWARD for bagging 3 golds, 1 silver and 5 bronze medals during the Guangdong-Hong Kong-Macao Greater Bay Area Mathematical Olympiad Heat Round Philippines. This award was given last January 12, 2020 in UP Diliman School of Statistics Auditorium.

The Big Bay Bei – Philippines (BBB – Philippines), aims to provide avenues for students from different schools to showcase their competence in mathematics. Moreover, it aims to strengthen the ability of their creative thinking and widen their international perspective, and promote the development of kindergarten, primary and secondary education and exchange of educational cultures throughout countries.

And the Mathletes did it again!

“Mathematics reveals its secrets only to those who approach it with pure love for its own beauty.” –Archimedes.